May 2 in Moscow will be a concert of the magic guys from SF9!

The guys originally trained on the program Neoz School Agency FNC Entertainment. The team was formed in 2016 through the Mnet TV channel and the survival show “DOB – Dance or Band”. The guys made their official debut on October 5, 2016 with the single album “Feeling Sensation”. 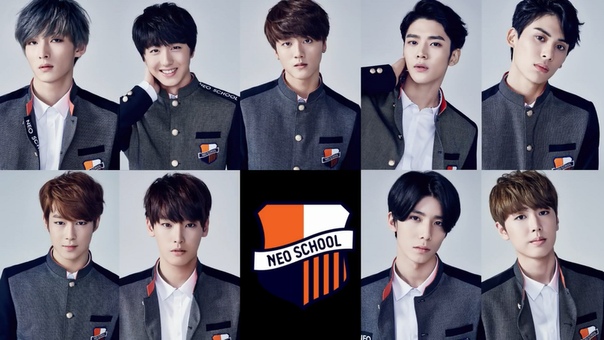 For the first time, the new FNC group became aware after they performed at the FNC Kingdom 2015 concert on December 11, 2015. At that time, the group consisted of 11 people. Jinquiu (now a member of Boys24) and undisclosed FNC Entertainment trainee Alex Bell were members of it at the time. All participants were revealed on December 12, 2015, becoming the first FNC Entertainment interns participating in the selection system called “Neoz School”. 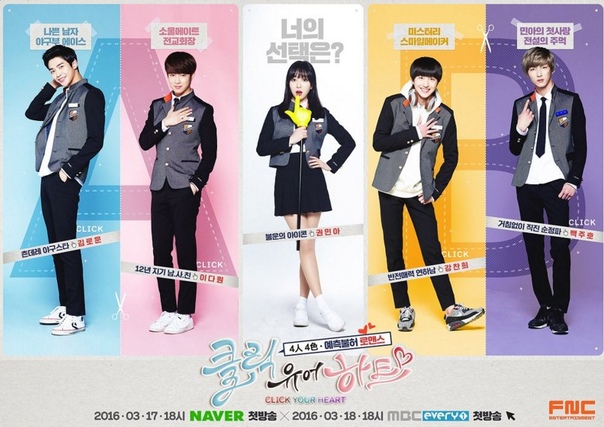 On March 3, 2016, a web-based drama “Click your heart” was launched, in which the main roles were played by Davon, Rowan, Juho and Chani, as well as Mina (AOA), the rest of the participants in Neoz School had secondary roles.

In May 2016, they participated in a d.o.b (dance or band) survival show called “Neoz Dance” in which they competed against the Neoz Band team for the right to debut. At the end of the show, they won, becoming the first men’s dance group FNC.

On August 21, FNC Entertainment announced the name of the group – SF9, which was originally deciphered as Sensational First 9. But later decoding was replaced with “Sensational Feeling 9”.
On August 27, they held their first fan-show, Surprise Festival 9, where they met with 99 fans. Later, they conducted a second fan meeting of the “Surprise Festival 9”, which was attended by 333 people.

On October 5, 2016, the band debuted with the single album “Feeling Sensation” with the title track “Fanfare”. They also officially debuted on the stage “M! Countdown “the next day. After the Fanfare promotion ended, SF9 started the promotion with the song K.O from the same album.

Taeyang did not participate in the start of the promotion because he injured his knee during a rehearsal. On October 20, Taeyang returned to promotion, and the very next day performed at the Music Bank. 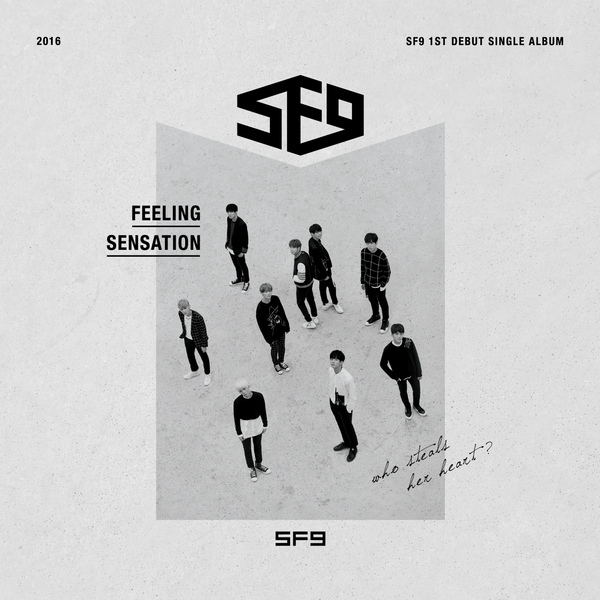 On November 20, 2016, they conducted their official fan meeting “Surprise Festival 9”. All tickets to the event were sold out within 30 seconds.

On December 24, 2016, they released the music video So Beautiful as a gift to their fans. The song is also OST to their web-cinema “Click Your Heart”.

On January 12, 2017, during the celebration of 100 days from the debut, SF9 via Naver V-App announced the name of their fan club – “Fantasy”. And on February 23, SF9 announced the first recruitment to the Fantasy fan club.

The first mini-album “Burning Sensation” was released on February 6 with the title track “ROAR”. The album ranked 6th on the Billboard World Albums Chart. On February 22, 2017, the Chinese version of the song “Still My Lady” was released.

SF9 held a Burning Fantasy fan rally on March 25, 2017, where they met with 600 fans, which marked the end of the promotion with ROAR.

However, a couple of weeks later, on April 18, SF9 returned with their second mini-album “Breaking Sensation” with the title track “Easy Love”. The album ranked number 5 on the Billboard World Albums Chart. 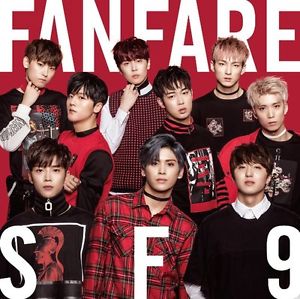 On August 2, the group released the second Japanese single-album “Easy Love”, and the group also held their first concerts on August 2 and 4 in Japan (Osaka and Tokyo).

On September 25, 2017, FNC Entertainment posted a video teaser for the upcoming comeback with the third mini album “Knights Of The Sun” on October 12, 2017 with the title track “O Sole Mio”. O Sole Mio, which starts with a charming guitar melody, created by Seo Youngbae (with Latin pop sound). Photo teasers and a clip on “O Sole Mio” were shot in California, USA. “Knights of the Sun” was number 7 on the Billboard’s World Albums Chart chart. 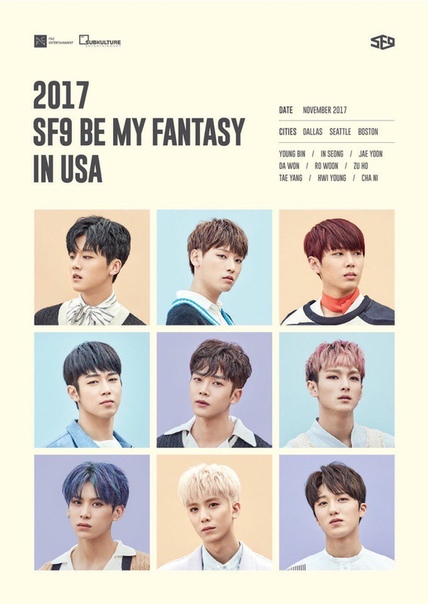 SF9 ‘Be My Fantasy’ were also held in US cities, November 15, 2017 – Dallas, November 17 – Seattle, November 19 – Boston. SF9 held events from December 21 to 24 in Japanese cities (Fukuoka, Tokyo, Osaka, Aichi) as part of the promotion of the first full-length Japanese album Sensational Feeling Nine, which was released on December 13, 2017 and included 11 tracks.

As part of the promotion with the album, there was a promotion for 2 weeks in 64 cinemas in the country (merch + photo zone + popcorn / cups of the image).On May 23, the release of the third Japanese single “Mamma Mia!” Took place. On May 29, 30 and June 1, SF9 successfully conducted the Zepp Tour 2018 in Japan in Osaka, Aichi and Tokyo.On May 26, 2018, the group turned 600 days since its debut.July 21, 2018 SF9 held a fancon in Seoul. Then the upcoming comeback was announced with the fifth mini-album “Sensuous” on July 31, 2018 with the title track Now or Never.

The director of the clip “질렀 어 (Now or Never)” was Beomjin Jo from the VM Project, he was also the director of the debut track “Fanfare”. SF9 also recorded OST “Love Me Again” for the Familiar Wife drama. The release of which took place on August 9, 2018.

FNC announced that SF9 will host a fan meet on August in South America. August 23 – Mexico, and August 25 and 26 – in Brazil. SF9 also held a fan-meet in Taipei on September 22. 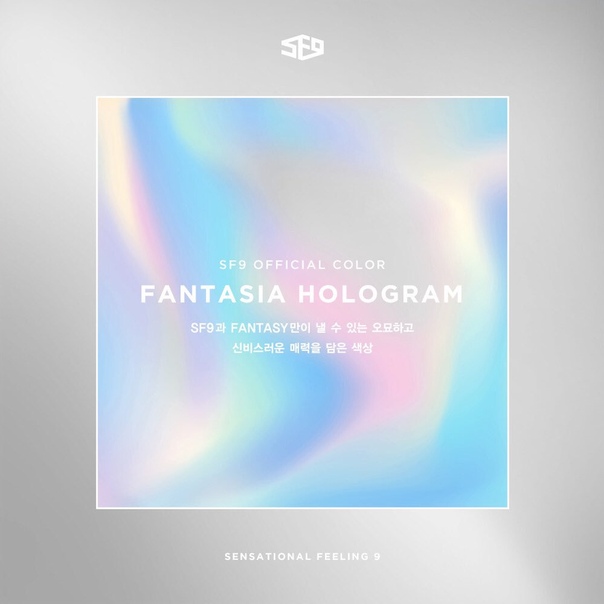 On October 5, 2018 for the second anniversary, the group acquired the official color “FANTASIA HOLOGRAM” and the official light-sticks, on October 20, 2018 the name of the light-stick was announced – 지구 봉 (jigu-bong). 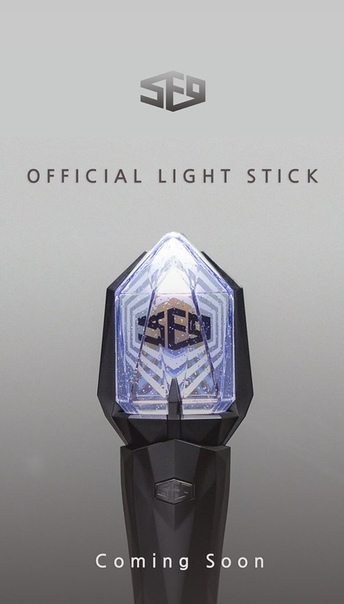 The release of the fourth Japanese single-album “Now or Never” took place on October 31, 2018. As part of the promotion of the album, SF9 held events from the 2nd to the 4th of November in the cities of Tokai, Kanto and Kansai.

On March 20, the band released the second full-length Japanese album “ILLUMINATE”. They also announced the 2019 ZEPP TOUR “ILLUMINATE” tour in Japan in Osaka, Aichi and Tokyo in April 2019.

On March 29, the FNC was informed that the concert in Amsterdam would be canceled due to local circumstances. P. S. All information, except prices, was taken from the official group on the social network VKontakte – https://vk.com/neoz_school. All copyrights remain with this community, the SF9 group, as well as their agency FNC Entertainment.